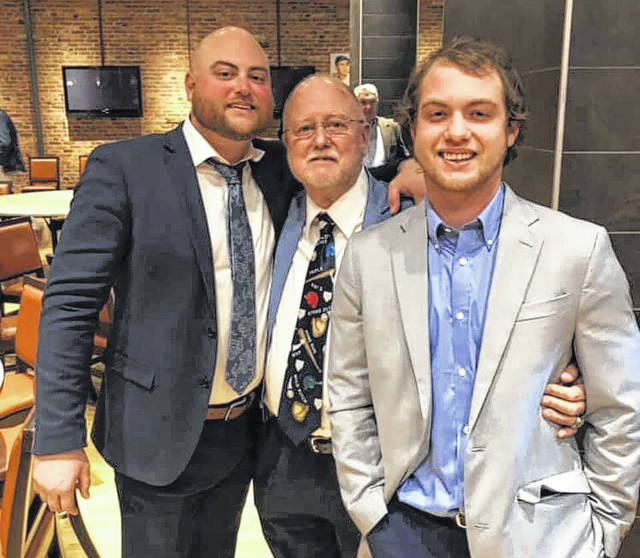 Contributed photos Paul Faulk (center), pictured with his sons, Tripp and Shane, was recently inducted into the Mid-Atlantic Scouts Association Hall of Fame.

LAURINBURG — Paul Faulk has accomplished a lot in the game of baseball, both as a coach and a professional scout.

Faulk is a member of the North Carolina Baseball Coaches Hall of Fame and the Garner High School Hall of Fame. On Nov. 16, the Laurinburg native was inducted into the Mid-Atlantic Scouts Association Hall of Fame, along with Shawn Pender.

Faulk was recognized for his accomplishments during his 30 years as a Major league Baseball scout. During that time Faulk worked with the Atlanta Braves, Kansas City Royals, Tampa Bay Devil Rays, New York Yankees and Cincinnati Reds. He worked with the Washington Nationals for the past 19 years.

“You know you’re getting old when you start getting stuff like this,” he laughed.

Faulk was inducted during a ceremony at Camden Yards, home of the MLB’s Baltimore Orioles. Around 100 people were in attendance.

As a part of his induction into the hall of fame, Faulk’s name was engraved on a plaque that is on display inside Camden Yards. Faulk said he considered that a great honor, and he also was pleased to see who showed up to support him at the ceremony. Among the attendees was a trio from Laurinburg — newly elected Mayor Jim Willis, Al Blades and Justin McNickle.

“It was a big surprise to see them,” Faulk said.

As a professional scout, Faulk worked with numerous players who went on to have careers professional careers. Robbie Ray, Jimmy Gobble, Pokey Reese, Brian Buchanan, Mike MacDougal and Quinton McCracken are some of the names that come to mind.

“You could be at the College of Charleston on Wednesday, and then have to be at Clemson on Thursday,” Faulk said. “It’s a lot of miles.”

But Faulk enjoyed that process. And he takes pride in the fact that he never had an accident while traveling between stadiums.

Before he was a scout, Faulk was a coach.

He was the head baseball coach and assistant football coach at Garner High for nine years (1977-86). As Garner’s baseball coach, Faulk posted an overall record of 145-51. Around that time, Faulk was also the coach of the American Legion Post 232 baseball team in Garner.

From there, Faulk moved on to South Brunswick High. In two seasons as South Brunswick’s baseball coach, Faulk had an overall record of 46-5. Faulk coached his team to an undefeated 29-0 record and a 2A state championship in his second year with the program.

Faulk then spent a year as the head baseball coach at Scotland High (1988-89). Under Faulk’s guidance, the Fighting Scots made their first state playoff appearance in eight years.

Faulk’s overall record as a high school baseball coach is 206-66.

Where he’s at now

Faulk currently resides in Myrtle Beach, South Carolina. His two sons are involved with baseball. Tripp Faulk is a scout with the Oakland Athletics, and Shane Faulk is a senior baseball player at North Carolina A&T.

Optimist baseball and softball results from May 13