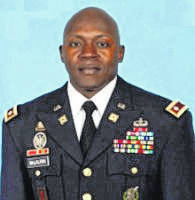 McLaurin began his career in 1989 as an armor officer, assigned to the 82nd Airborne Infantry Division, Ft. Bragg, N.C. where he served as a platoon leader in the 3/73rd Armor Battalion.

He is currently the Army national account manager in Fort Belvoir and is also the liaison officer for the army G-4 at the Pentagon.

He also holds an Associate Degree in Liberal Arts from St. Leo University, Bachelor of Arts Degree in Philosophy from Shaw University and Master of Science Degree in Occupational Safety Health from Columbia Southern University and National Resource Strategy from National Defense University-Eisenhower.

He is married to the former Sharon A. McKoy of Wagram, N.C. They have two children, Wilson and Morgan. He is the son of John McLaurin of Maxton, N.C. and Brenda Olige of Laurinburg, N.C.