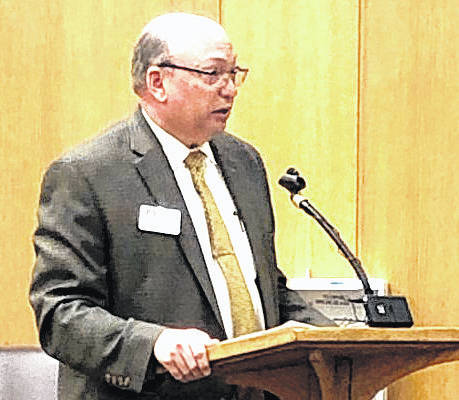 JJ Melton | The Laurinburg Exchange Dale McInnis, president of Richmond Community College and chairman of the Chamber, opened the forum on Tuesday.

LAURINBURG — The Laurinburg/Scotland County Area Chamber of Commerce gave candidates running in the primary election on March 3 the opportunity to state their platforms on Tuesday.

Moderated by Larry Schulz, a professor of political science at St. Andrews University, topics discussed during the forum ranged from minimum wage to gun rights.

County Board of Commissioner candidates were asked if they were in favor of Sheriff Ralph Kersey’s recent proposal for Scotland County to become a 2nd Amendment Sanctuary, and all candidates answered with a resounding yes — with the exception of Darrell “BJ” Gibson Jr.

“I support the Constitution, but we need gun reform and change,” said Gibson. “I would not support the sanctuary; citizens do not need the same guns the government has.”

Another question presented to the board referred to their opinions on giving support for a joint effort between the city of Laurinburg and Scotland County Parks and Recreation for a recreation facility.

“We as commissioners have tried everything we know to try,” said John T. Alford. “We have been meeting with communities to try to help them with their recreation centers.”

“The bottom line is money,” said Davis. “We would have to raise taxes.”

Mollie Flowers voiced her opinion on the need for change while speaking with WLNC.

“I’ve been wanting to run for a long time and it was the right time,” said Flowers. “ We need a change. When you put the same people over and over in the office, we just need new ideas.”

Along with the commissioner candidates, District 9 congressional candidates were also given their chance to address Scotland County residents.

Cynthia L. Wallace addressed the audience with her opening statement: “My values are with yours. I want to see gender pay equality.”

Federal funding was also a big topic among the candidates.

“There are millions of dollars in DC that are not being brought here, I would work to change that,” said Harry Southerland.

Marcus Williams was not present for the forum. An opportunity for a representative to sit in his place was given, but there was not one present.

Brooks continued by saying it’s important for residents to be informed, but it’s also important for those in office to back up what they say.

The forum lasted approximately an hour.

A video recording of the forum is being placed on the Chamber’s Facebook page.