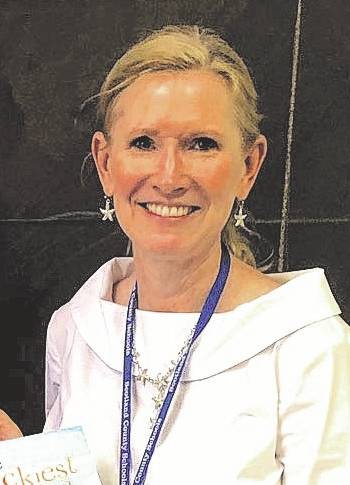 LAURINBURG — There were nine pallets of books delivered to Scotland High School to fill the media center with the titles students wanted — all thanks to a BRICK grant.

Sharon Castelli, the literacy project director for Scotland County Schools, spoke to the Scotland County Board of Education on Monday to give an update on what has been done with the grant money and what is coming up.

“We had an exciting week last week with the delivery of over 3,000 books to our high school,” Castelli said. “We unpacked those books this week so they are on the shelves and after the test day is over we’re going to make sure they’re in title wise and ready for students to check out.”

Vice-chair Carolyn Banks asked how the books were chosen for the high school and Castelli explained that a survey was given to the students, which the company based the books on that.

“You’re going to see fiction, historical fiction, reference material, they asked for ACT reference material,” Castelli said. “We purged the old collection but we’re going to be adding back based on what we’re taking out, but the students really like the manga books and graphic novels … one young man said ‘I’m a senior and you’re just now getting these in the media center.’”

She added Spring Hill Middle School and Wagram Elementary will be adding more to the collection in the media centers since the schools participated in purging last year there is funding to get the centers back to where it was.

Castelli said, in November and December, the schools had three professional development programs that met with teachers, facilitators and administration and were tailored to the school’s needs. Also in November and December media specialists at the school implemented allowing students to stay after school and it increased participating and are looking to moving to give students a meal. Board Chairman Rick Singletary asked for exact numbers of students participating and Castelli said she would get those and bring them back to the board.

The BRICK grant, an acronym for Building Readers and Instilling Confidence and Knowledge, is being spread through numerous efforts locally. It supports children from birth to graduation — so before the children come to the schools they’re already being helped with their reading skills.

— The board was recognized as January is National School Board Recognition Month for the efforts made year-round for the students and the community.

— There was also an update on the construction of South Johnson Elementary. The construction is behind three to four weeks due to rain and cool temperatures but the schools should be able to move in on June 1 still. The school is almost completely dried in except for the tower at the entrance of the school which will be done in the next few weeks.